Aarne Arvid Mölläri was the eldest child of Vilho and Katri. He was born 30th on October in 1902 in Kemi. During Aarne´s youth, Finland came intependent and soon drifted into the civil war, in which Aarne also participated. Despite the fact that not many years had accumulated. Aarne who fight on the white side, took part of in the battle of Kilislampi in March in 1918 and continued in the ranks of defense league  even after the civil war until the end of the continuation war. 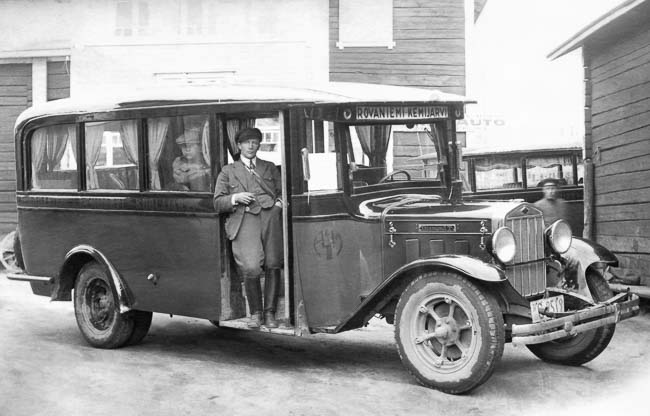 During the war truks and buses were confiscated to the state and after the war they were  returned to their owners, at which time Aarne got his trucks and three of his buses back. Mölläri´s bus was Brogway branded and attracted the attention and admiration it deserved with its tobacco parlors. After the wars the cars had gotten in bad shape. So repair and ingenuity were required  to be able to drive them again. In the early days,
Aarne´s brothers Veikko ja Mauno were also involved in Mölläri´s transport company.

In december 1924 Aarne married Maria (Maija) Karjalainen from Kemijärvi. The young couple setled in Katri and Vilho Mölläri´s house. They had three children, one of them died young. Evenings and sometimes in night  Aarne repaired the buses along with his son Paavo, so they can drive next day. The parts had to be further developed themselves because there was nowhere to buy them.

Aarne had a freight traffic license from Rovaniemi to Kemijärvi and Kuolajärvi as early as 1926. In 1930 Aarne Aho ja Mölläri received a passangers transport license for the Rovaniemi-Kemijärvi-Kuusamo line, when sheduled and regular traffic began on the verge. In the 1940s. as the condition of the roads improved and with the expansion of the road, there were more buses. In addition Kemijärvi. Rovaniemi, Kuolajärvi, Kuusamo, company drove regular lines to Pelkosenniemi, Savukoski  and Sodankylä.

Paavo has been interested in his farher´s cars from a young age, often helping with car maintenance or as a financier in buses. At that time it was customary for buses to always have a financier in addition to the driver, who collected and checked the passanger´s tickets.

In 1949, Paavo´s father Aarne died when Paavo was 21 year old. Together with his mother Maria, Paavo continued the company. Paavo now benefited from the work experience of his youth, as he was mainlly responsible for the buses and gradually for the operation of the entire company. Paavo married Laila Karoliina Aho from Kemijärvi in October 1950. Laila and Paavo settled in Mölläri house, which also had facilities for transport. Six children were born to Laila and Paavo´s family.

In 1960, Maria sold the entire business for her son Paavo, who had already expanded the business by acquiring more cars through acquisitions and opening new lines.Paavo himself was constantly involved in the company´s activities, from car repairs, driving to  company negotiations and accounting. Paavo was almost always at work, so he commonly called by the nickname everyday-Paavo. 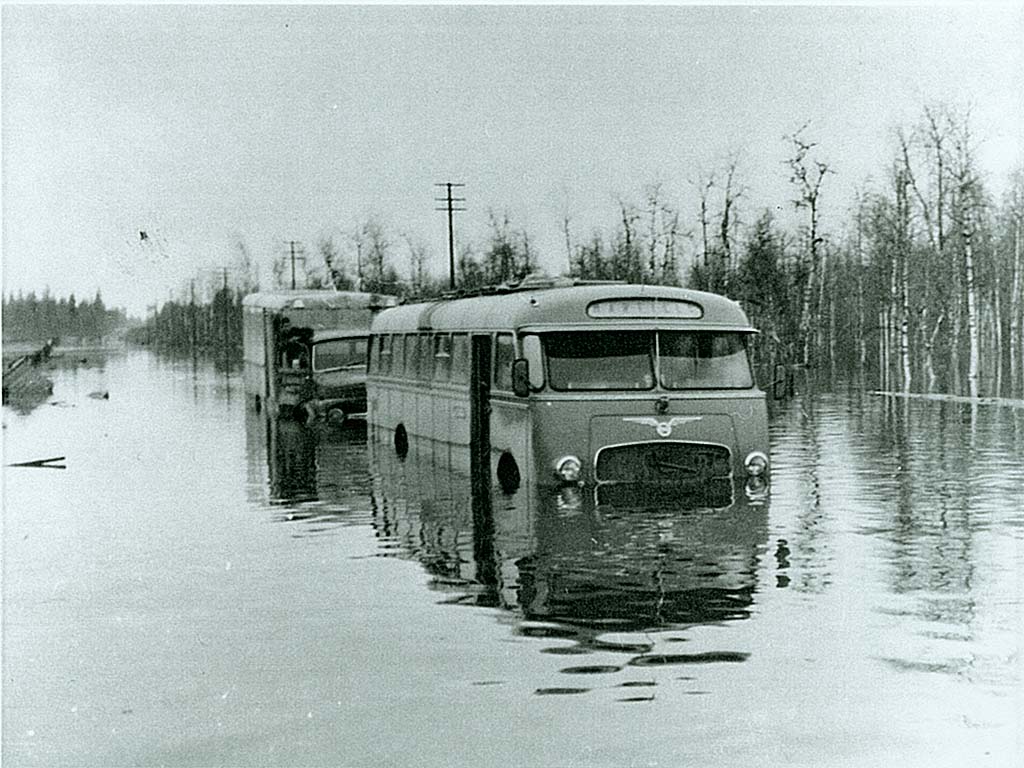 Conditions of the roads were not always easy.

Paavo was known in his work as a determined hard-working entrepreneur who thought best of his house and the workers. He was able to act as a skilled organizer as needed, diving the tasks according to what each person could do best. The work had to be done as it appeared.

His goal was to keep his own field clean, that is, there should be no unresolved contradictions inside his own house.The same principle was held with local entrepreneurs in the field.

For Paavo, the profession of a carrier became a way of life that was difficult to break away from. According to Laila Mölläri, he considered satisfield customers to be best part of his job.

Over the years, Paavo Mölläri acquired new buses, so that in 1975 the company had a total 14. Paavo died of a sudden illness on July 13, 1975 at the age of only 47. After Paavo´s death, the company was run by his wife, Laila and it became a limited company. Möllärin Linjat Oy was remained like a family business despite its incorporation, as some of Paavo´s and Laila´s children have continued in the footsteps of their father and grandfather in operations.